With 54 models of aluminum storm doors and numerous additional glass options among five different brands, ProVia offers the highest level of customization to provide storm door products that appeal to the aesthetic and functional needs of any home. 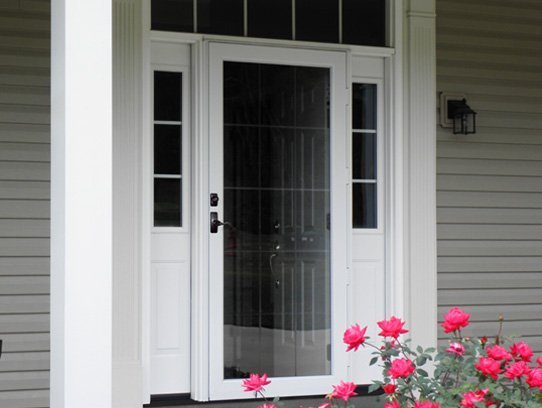 If you are in need of new storm door installation, Ganser has the answer! Stop by our showroom to take a look at some of the storm doors we install every day. Our dedicated team won’t rest until we have the answer to your home improvement needs.

“I was so pleased that our nine windows were done in a good time frame and efficiently. The two men who came out to install the windows were super friendly and nice. When we were getting a quote done on our windows Mark explained all of our options and he suggested the best one’s he thought would fit the house and our liking. After our meeting their staff was very good at keeping us updated and reminding us of our appointments and final meeting. I would definitely suggest Ganser because they get the job done right and they are a true family owned business. With our new windows I feel like our house keeps heat in better ansld now we are prepared for the cold and snow with no worries.”

“Recently we had Ganser Company replace the windows in our WI home. The Infinity fiberglass windows and the installation were outstanding. Jake the installer and Jason who worked with him, were excellent. The old windows were removed and the new windows installed with no damage to the existing drywall or to the exterior cedar siding. The crew actually arrived early every day, put down plastic sheeting on the carpeting, and cleaned up daily. We wanted to match the existing baseboard and Jason (a different Jason from the one referenced above) who does the staining and varnishing matched the finish perfectly. We also decided to remove several interior doors and reframe the opening, and Ganser was able to accommodate this request while they were doing the windows. We were totally satisfied with the work that Ganser did for us, and would not hesitate to use them again.”